What are the new features introduced in c# 4.0?
This question is basically asked to check, if you are passionate about catching up with latest technological advancements. The list below shows a few of the new features introduced in c# 4.0. If you are aware of any other new features, please submit those using the from at the end of this post.
1. Optional and Named Parameters
2. COM Interoperability Enhancements
3. Covariance and Contra-variance
4. Dynamic Type Introduction

Difference between EXE and DLL?
1. .EXE is an executable file and can run by itself as an application, where as .DLL is usullay consumed by a .EXE or by another .DLL and we cannot run or execute .DLL directly.
2. For example, In .NET, compiling a Console Application or a Windows Application generates .EXE, where as compiling a Class Library Project or an ASP.NET web application generates .DLL. In .NET framework, both .EXE and .DLL are called as assemblies.

What is the main use of delegates in C#?
Delegates are mainly used to define call back methods.

What do you mean by chaining delegates?
Or
What is a multicast delegate?
The capability of calling multiple methods on a single event is called as chaining delegates. Let me give you an example to understand this further.
1. Create a new asp.net web application
2. Drag and drop a button control and leave the ID as Button1.
3. On the code behind file, add the code shown below. 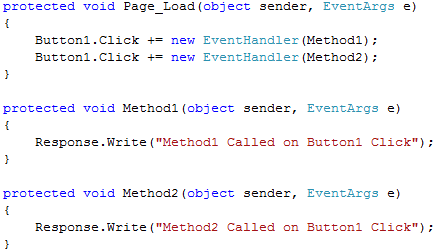 When you click the Button now, both Method1 and Method2 will be executed. So, this capability of calling multiple methods on a single event is called as chaining delegates. In the example, we are using EventHandler delegate, to hook up Method1 and Method2 to the click event of the button control. Since, the EventHandler delegate is now pointing to multiple methods, it is also called as multicast delegate.

What are the advantages and disadvantages of using arrays?
Advantages of using arrays:
1. Arrays are strongly typed, meaning you can only have one type of elements in the array. The strongly typed nature of arrays gives us
2 advantages. One, the performance will be much better because boxing and unboxing will not happen. Second, run time errors can be prevented because of type mis matches. Type mis matches and runtime errors are most commonly seen with collection classes like ArrayList, Queue, Stack etc, that are present in System.Collections namespace.
Disadvantages of using arrays:
1. Arrays are fixed in size and cannot grow over time, where ArrayList in System.Collections namespace can grow dynamically.
2. Arrays are zero index based, and hence a little difficult to work with. The only way to store or retrieve elements from arrays, is to use integral index. Arrays donot provide convinient methods like Add(), Remove() etc provided by collection classes found in System.Collections or System.Collections.Generics namespaces, which are very easy to work with.

What is a partial class. Give an example?
A partial class is a class whose definition is present in 2 or more files. Each source file contains a section of the class, and all parts are combined when the application is compiled. To split a class definition, use the partial keyword as shown in the example below. Student class is split into 2 parts. The first part defines the study() method and the second part defines the Play() method. When we compile this program both the parts will be combined and compiled. Note that both the parts uses partial keyword and public access modifier.

What are the advantages of using partial classes?
1. When working on large projects, spreading a class over separate files enables multiple programmers to work on it at the same time.

2. When working with automatically generated source, code can be added to the class without having to recreate the source file. Visual Studio uses this approach when it creates Windows Forms, Web service wrapper code, and so on. You can create code that uses these classes without having to modify the file created by Visual Studio.

What is a Destructor?
A Destructor has the same name as the class with a tilde character and is used to destroy an instance of a class.

Why is it not a good idea to use Empty destructors?
When a class contains a destructor, an entry is created in the Finalize queue. When the destructor is called, the garbage collector is invoked to process the queue. If the destructor is empty, this just causes a needless loss of performance.

Usually in .NET, the CLR takes care of memory management. Is there any need for a programmer to explicitly release memory and resources? If yes, why and how?
If the application is using expensive external resource, it is recommend to explicitly release the resource before the garbage collector runs and frees the object. We can do this by implementing the Dispose method from the IDisposable interface that performs the necessary cleanup for the object. This can considerably improve the performance of the application.

What is a constructor in C#?
Constructor is a class method that is executed when an object of a class is created. Constructor has the same name as the class, and usually used to initialize the data members of the new object.

We cannot create instances of stat

Oops, you forgot something.

The words you entered did not match the given text. Please try again.